“Searching for the Image” Bevan Shepherd

From the beginning of time people have been producing images that describe their experiences and emotions. A retrospective exhibition of Bevan Shepherd’s paintings, drawings and prints reflect his experiences, vision and feelings about the world over the past 52 years. Bevan is a Director of Tussock Upstairs Gallery in Point Lonsdale

Bevan commenced a secondary art teacher-training course in 1961 at the Gordon Institute of Technology in Geelong where he completed the first 2 years of his Associate Diploma of Art. As a 17 year old his first experience at life drawing he recalls as one of apprehension and a great challenge to his country 1940’s and 1950’s upbringing.

He often reflects on these early training experiences such as life drawing and costume drawing as important and necessary to understanding form, design and composition.

The third year of his art teacher-training course was completed in Melbourne in 1963 where Bevan specialized in painting at the Royal Melbourne Institute of Technology.

His first solo exhibition was held at the Stuart Gerstman Galleries in Hawthorn in 1973 and since that time although working full time as an art teacher and in later years a Principal of a large secondary school Bevan has continued to exhibit quite regularly.

A major solo exhibition of prints was held at Drummond Street Gallery in 1981 where a stronger influence of Jan Senbergs is quite evident particularly in “Marlboro Country” 1979, “The Didn’t Work Out Print” 80, “Performer I” 1980 and “Performer IV” 1981. These prints and many others from his prolific printmaking activities during this time will be on show in this exhibition. Bevan will be including examples of his large 70’s paintings.

The Gordon Institute of Technology acquired two of his works as part of the “Emerge 2011” exhibition held in 2011. This pleased Bevan very much as he felt that he had come full circle to where he started his art career and appreciated the fact that his works had been selected for acquisition

Bevan’s recent works continues to have a focus on the landscape. The images he presents to us, which at times provides us with an oblique view of it, sometimes obvious sometimes ambiguous. The swirling intertwining subtly coloured shapes invite us to explore and question their intent. What do they represent? Where are they going?

In recent years Bevan has been producing small etchings and inkjet prints that visitors to Point Lonsdale (where he lives) have sought out as gifts and memories of their visit, many being sent over seas and interstate. These works include aspects of his mainstream works and with an original view of seagulls, ships and coastal views.

The exhibition runs from August 18th until September 14th at Tussock Upstairs Gallery Point Lonsdale. The official opening will be held on Saturday 23rd August 3-5pm. Members of the public are invited to the opening to celebrate with Bevan on this auspicious occasion. 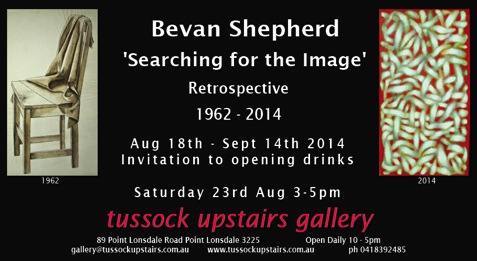