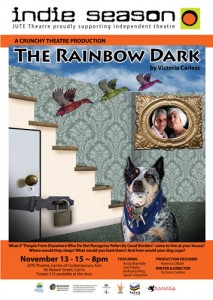 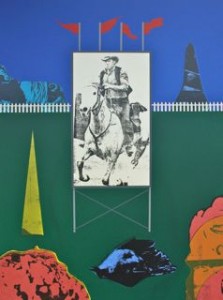 Local artist Tom Wells will be exhibiting landscapes with themes derived from experiences in places such as Andamooka, Arnhem land, Pilbara,The Flinders Ranges, Eastern Seaboard rivers, Tasmania and maritime subjects on the Bellarine Peninsula. Works on show include atmospheric watercolours, oils and pastels. Tom has won a number of awards, including the Minnie Couch Prize for Watercolour 1963 and the Camberwell Rotary Prize for Watercolour 1971. He is represented in a number of regional and overseas galleries.

Cairns artist, Kain Shepherd will be exhibiting posters he has created over many years. Some emanating from his time in Darwin and have a “far north” feel about them. As a graphic artist Kain uses colourful images when advertising events and activities. Through the use of photomontage the images in the posters are in some instances quirky and lyrical and at other times some have a surrealist feel about them.

Local artist Bevan Shepherd, Kain’s father, will be presenting digitized versions of some of his many screen prints that he exhibited in the 1970’s. The prints were developed when Kain was a young boy. Viewing their works side by side shows an interesting connection. Bevan’s original screen prints are quite large and the new versions on show are in a more manageable format. His themes include personal comments on what he saw around him in the 60’s and 70’s. Bevan has been exhibiting regularly since 1973 and is represented in public collections as well as many private collections in Australia and overseas

Erica Wagner is a Melbourne based artist. In this exhibition the landscape will be the focus of the works on show. Erica is also a children’s book publisher with Allen & Unwin. She had her first solo exhibition at the Cambridge Studio Gallery in 2011 and exhibits regularly with the Victorian Artists Society and the Contemporary Art Society. Erica was the winner of the CAS Annual Exhibition in 2011.