‘Point Lonsdale & More’
Many works in this exhibition will reference Point Lonsdale, the Bellarine Peninsula and other areas. We will be introducing some new artists who will be exhibiting fresh images and styles of works for visitors to enjoy
Opening Drinks Saturday 3rd February 3pm – 5pm
Exhibition Dates
February 3rd – 25th February 2018
Featured artists will include local artist Michael Ryan who will be showing some new whimsical views of Point Lonsdale and Bevan Shepherd will be exhibiting his painting, ‘Flight over Lonsdale’ in the exhibition. This painting portrays his interpretation of a Japanese reconnaissance flight over Point Lonsdale and Melbourne that occurred in 1942. The Japanese plane was carried on a large submarine in sections and was able to be put together at sea and launched by catapult from the submarine. As a ‘float’ plane it could land on the water near the submarine after a reconnaissance flight and then be dissembled and stowed on board the submarine for future use.
Historic records of the flight indicate that before dawn on Thursday 26 February 1942 the Japanese pilot, Nobuo Fujita flew north across Bass Strait headed for Cape Otway where he banked to the north east and followed the coastline to the Point Lonsdale lighthouse near the narrow entrance to Port Phillip Bay. He then headed north – east towards the city of Melbourne. Fujita struck a few heavy banks of cloud. He flew across the Bellarine Peninsula towards Portarlington. The city of Geelong was 16 kms away to the left of his aircraft on the other side of Lake Connewarre.
REFERENCE
Jenkins, David, “Battle Surface – Japan’s Submarine War against Australia
1942 – 44”, Random House Australia,1992 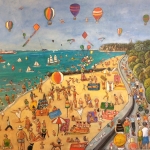 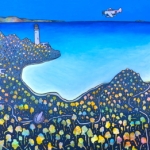